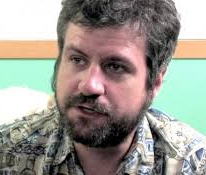 This week’s Southern Illinois Wonders will feature poetry by regional author, artist, and cultural historian Gary DeNeal, read and discussed by his son, songwriter Hugh DeNeal of The Woodbox Gang.

The Poet: For more than three decades, Gary DeNeal has been exploring the natural and cultural dimensions of southern Illinois in non-fiction, fiction, poetry, photography, and other media. Author Jeff Biggers has dubbed him “the poet errant of southern Illinois.” He publishes Springhouse, “An Adventure Shaped Like a Magazine,” featuring history, folklore, and creative writing reflecting regional culture. He shares his artistic photographs of southern Illinois’ natural wonders and musings inspired by them on his blog, In Womble’s Blue Shadow, published on the websites of several newspapers. Author of the award-winning A Knight of Another Sort: Prohibition Days and Charlie Birger (1981/1998), he is co-author, with Brocton Lockwood, of Shades of Gray (2011), a fictionalized account of events surrounding the 1922 Herrin Massacre. He lives near Herod, close to the Pope-Saline county line, with his wife and co-editor, Judy.

The Speaker: Hugh DeNeal is a critically acclaimed songwriter and founding member of The Woodbox Gang, “Southern Illinois’ Original Trashcan Americana Band.” The band has performed at venues ranging from Carbondale’s Hangar 9 to the Kennedy Center for the Performing Arts in Washington, DC. The most recent of the group’s eleven albums is Glorious Scars (2012). Many of Hugh’s original compositions draw upon regional history and culture, including those appearing on The Woodbox Gang’s 2003 album, I’ve Killed Men, inspired by the story of gangster and bootlegger Charlie Birger. Hugh is profiled in the film Confidence Man: The Hugh DeNeal Story (2011).