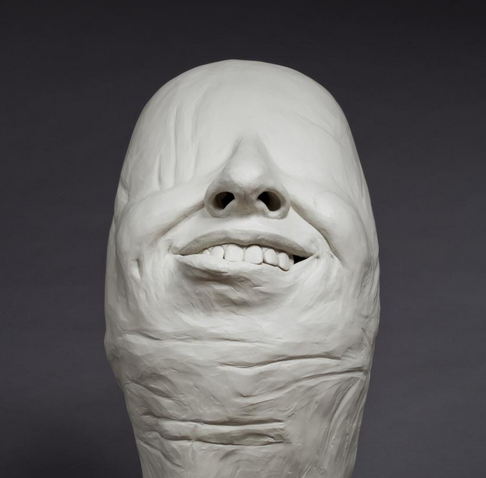 The work of Rodrigo Lara (b. 1981, Toluca, Mexico) surveys politics, immigration, and social justice. Through a site-specific installation, Lara depicts the unjust Mexican Repatriation in the 1930s by the President Hoover and Roosevelt administrations. He portrays these events in a provocative, ironic, yet contemplative tone. The Great Depression engendered anti-immigrant sentiments that enabled the relocation of many people, most of whom were U.S. citizens of Mexican descent.

We’re excited to announce that Documents Bureau, a project of The Society of Smallness, will help make this a memorable night, along with refreshments generously provided by 5 Rabbit Cervecería.

After an introduction by the exhibition’s curator, Dolores Mercado, Rodrigo Lara and Daniel R. Quiles (Professor of Art History, Theory, and Criticism at SAIC) will talk about the stunning sculptures that comprise Deportable Aliens, as well as the historical inspiration for the exhibition – Mexican Repatriation, the little-acknowledged mass deportation of Mexican-born individuals during the 1930s. RSVP here.

This event is the first in our new six-part program series, Latino Americans: 500 Years of History, that celebrates the past, present, and futures of Latinos in the United States.

Please join us for a celebration of Lara’s work and a conversation about Deportable Aliens that resonates with contemporary issues of immigration, social justice, and politics.

This Illinois Humanities program is supported, in part, by a competitive Latino Americans: 500 Years of History grant from the National Endowment for the Humanities (NEH) and the American Library Association (ALA). This is the first installment of a series of six programs about the past, present, and future of Latinos in the United States.

This event will be held in English, but other events in the Latino Americans series will be bilingual.

If you need a sign interpreter or require other arrangements to fully participate, please contact Jane Beachy at jane.beachy@ilhumanities.org at least 72 hours prior to the event. For parking locations near the facility, please visit ChicagoParkingMap.com.

Rodrigo Lara
Rodrigo Lara was born in Mexico in 1981. He graduated Summa Cum Laude from the University of Guanajuato in 2003, and received his MFA at the School of the Art Institute of Chicago in 2013, where he graduated with the Raymond James Nelson Fellowship. He has received several awards including: 3Arts Grant nominee, Chicago 2015; “Teaching Artist Scholarship, Center Program,” Hyde Park Art Center in 2014; “Artist’s Grant” Residence, Vermont Studio Art Center in 2014; International Graduate Scholarship 2012-2013 SAIC; and the “John W. Kurtich Travel Scholarship,” SAIC Berlin/Kassel, Germany 2012. He won the first prize in sculpture at the “National Award for Visual Arts 2010” Querétaro, Mexico. He had a solo exhibition at the Museum of Modern Art in the state of Mexico in 2011. Lara has upcoming solo exhibitions in Chicago area, including Hyde Park Art Center in 2016, the National Museum of Mexican Art in 2015, as well as participating installations at EXPO Chicago in 2015, the Chicago Architecture Biennial, and at 6018 North, among others.

Daniel R. Quiles
Daniel Quiles is an Assistant Professor of Art History, Theory, and Criticism at the School of the Art Institute of Chicago, where he teaches courses on the theory and history of postwar art of the Americas. His research has appeared in academic journals such as Art Journal and ARTMargins, and he is currently writing a book manuscript titled Ghost Messages: Oscar Masotta and Argentine Conceptualism. He is also an art critic who has written for Artforum, Art in America, and DIS Magazine, among other publications. He was a 2003-2004 Critical Studies Fellow in the Whitney Independent Study Program, received a 2013 Warhol Foundation Arts Writers Grant, and was the 2013-2014 Post-Doctoral Fellow in the Institut d’Histoire Moderne et Contemporaine at École Normale Supérieure in Paris.

Dolores Mercado
Ms. Mercado has been the Associate Curator at the National Museum of Mexican Art since 2008, where she also works for the Permanent Collections Department. In addition, Ms. Mercado previously worked as the Associate Director of Education and Senior Arts Educator. She has been part of the Exhibitions Committee, Permanent Collections Committee and Performing Arts Committee at the NMMA.  Exhibitions Ms. Mercado has curated include Vida Breve: Day of the Dead 2010, Women Artists of Modern Mexico: Frida’s Contemporaries (at the NMMA and Museo Mural Diego Rivera) and La vida sobre papel: Judithe Hernandez, El Alma de la Fiesta, Hanal Pixán: Food for the Souls, Fragmentos: Pilar Acevedo, 100 Años de Posada y su Catrina: Day of the Dead 2013, Rito y Recuerdo: Day of the Dead, Carmen Parra: Suave Patria and La Muerte Niña: Day of the Dead (planning stages), among many others.  She was also the  Co-Curator of Rastros y Crónicas: Women of Juarez, and the curator and coordinator of Quilt Me A Story: Nuestros Relatos (Immigration Stories). Ms. Mercado was the curator of Mirando al Sur: Looking South at Woman Made Gallery, in addition to serving as Coordinator and Assistant to the Curator of Nahui Olin: A Women Beyond Time (NMMA).

Ms. Mercado has also worked on Camino Tierra Adentro (1999 to 2004), and Alquimia (2004-2006), Radio Programs at WRTE 90.5 FM, NMMA. She served as Coordinator and Co-Author for the Women Artists of Modern Mexico: Frida’s Contemporaries Catalogue, and Coordinator of Nahui Olin: A Woman Beyond Time Catalogue (in process). Ms. Mercado received a Bachelor’s at the Art School “La Esmeralda” in Mexico City, and has also taken courses at “La Academia de San Carlos” from the UNAM in Mexico City, The School of Video of the University of Guadalajara, and at the School of Visual Arts of the University of Guadalajara. She has exhibited in Mexico, Spain, the United States, Nicaragua and Canada.

The Society of Smallness
Documents Bureau exploits our familiarity with bureaucracy and turns it into an opportunity for creativity and play. A cast of performers embodying office workers collaborates with the public to produce official-looking documents that attest to all the small, personal, and mundane goings-on of daily life. Documents Bureau is a playful, critical arena for questioning our daily interactions. Participants’ universal experiences with daily business transactions become a lingua franca for improvisation and enable instances of the carnivalesque (Bakhtin) such as role reversals, the coming together of unlikely people, and temporary reversals of the social order. Typical forms—certificates, licenses, and affidavits—serve as vehicles for warm, interpersonal, and meaningful exchanges.

Documents Bureau is a project of the Society of Smallness, a collective of enthusiasts of all ages and backgrounds exploring the potential for small actions to generate creative opportunities for everyone.
More at:
Societyofsmallness.com
https://www.facebook.com/ SocietyOfSmallness