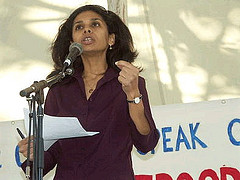 Six years after the occupation of Iraq, join us for this intimate conversation with Dr. Dahlia Wasfi who will share her reflections on peace and justice in Iraq and the Middle East.

This program is free and open to the public. Reservations are recommended and can be made online, by email at events@prairie.org, or by calling 312.422.5580.

Also join us for a special screening of the documentary Encounter Point, with a post-film discussion featuring Dr. Wasfi, Rabbi Brant Rosen, and others at 6:30 PM at the Cultural Center.

Dr. Dahlia Wasfi was born in 1971 to a Jewish-American mother and a Muslim-Iraqi father. She spent her early childhood in Iraq, which was then under Saddam Hussein. In 1977, she returned with her family to the United States. Dr. Wasfi graduated from Swarthmore College in 1993 with a B.A. in Biology and, in 1997, graduated from the University of Pennsylvania School of Medicine. In February/March of 2004, after years of separation, Wasfi visited Iraq to see her family in Basrah and Baghdad. She journeyed to Iraq again for a three-month visit in 2006. Based on her experiences, she is speaking out against the negative impact of the U.S. invasion on the Iraqi people and the need to end the occupation.

This event is sponsored by Chicago DCA Theater, Theatre Mir, and The Public Square.

This discussion is part of the special events series for "The Arab-Israeli Cookbook," presented by Theatre Mir in association with Chicago DCA Theater, March 5 – April 5, at Chicago DCA Storefront Theater.  In "The Arab-Israeli Cookbook," Arab and Israeli voices come together in the stories of ordinary people living in a rich yet divided world in Israel and the West Bank.