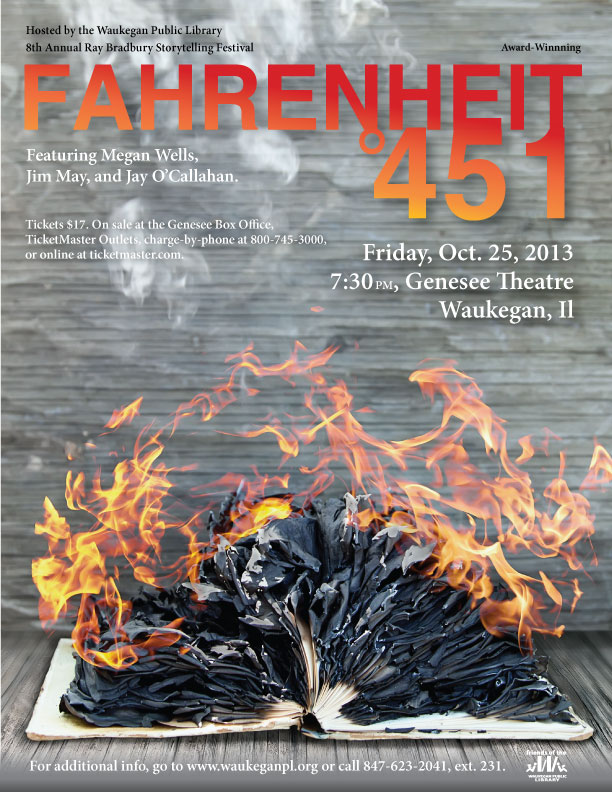 This year’s theme, Fahrenheit 451, highlights banned and burned books from history through one of Bradbury’s best-known novels and reflects on the disappearance of the written word. Professional storytellers will take the stage in shared support of the freedom to express ideas with stories that have been censored or targeted with removal or restrictions from libraries and schools.

Hosted by the Waukegan Public Library, the award-winning festival presents two performances every year on festival day, a scary evening show for listeners age 12 and older, and a 10:30 a.m. matinee for school kids.

Megan Wells serves as the artistic director of the festival and appears each year in the persona of various nefarious characters, from Dracula to Mr. Dark. She holds an MFA in theater arts and numerous theater awards including the Joseph Jefferson Award for directing.

The festival emcee, Jim May, is co-founder of the Illinois Storytelling Festival. He earned the Circle of Excellence Award from the National Storytelling Network in 2000 and continues to perform on stages worldwide. He’s the author of several books, including a collection of original stories named “Best Book” by the Public Library Association.

Jay O’Callahan has performed at the Abbey Theatre in Dublin, National Theatre Complex in London, the Olympics, Lincoln Center, and the Boston Symphony Orchestra. He is a regular contributor to National Public Radio and leads creativity workshops for corporations and other interested groups. Recently, O’Callahan completed Forged in the Stars, a story that was commissioned by NASA (National Aeronautics and Space Administration) for their fiftieth anniversary and he is currently performing it at NASA locations around the country.

Honoring Waukegan’s famous writer-offspring, the Ray Bradbury Storytelling Festival has entertained fans of storytelling and classic literature for the past seven years. In the past, each festival celebrates a unique literary theme such as “Literary Monsters”, “Literary Ghosts” or “Literary Witches.”

This year’s theme “Fahrenheit 451” tackles issues surrounding democracy and literacy. As the written word continues to disappear, the future of libraries, literacy, and free access to knowledge is uncertain.

“You don’t have to burn books to destroy a culture. Just get people to stop reading them,” said Bradbury. “Bradbury understood the importance of reading, writing, and learning to a successful society,” said Richard Lee, executive director of the Waukegan Public Library. “He feared the slow destruction of books and the written word. In Waukegan, not only do we see the rising popularity of eBooks, acronyms, and textspeak, we live and work with those who do not even have the foundation of basic reading and writing skills in English or in Spanish.”

Tickets are $17 for the evening show and $5 for the matinee. Library patrons can present any library card and receive $1 off at the box office.

Purchase tickets at the Genesee Theatre box office.
Box Office hours: Tuesdays – Fridays from Noon – 6PM and 2 hours prior to every live performance.

For more information, contact the library at (847) 623-2041 or http://www.waukeganpl.org/Storytelling-Festival.