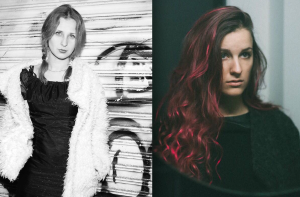 Pussy Riot: Punk Politics and Prisons
Moderated by Coya Paz
Sunday, February 21st
Thalia Hall (1807 S Allport St, Chicago)
Doors open at 7:30pm / Program at 8:30pm
Advance tickets to this show are sold out.
We will have a limited number of tickets available at the door when we open the night of the show.
They are first come, first serve.

The Russian feminist collective Pussy Riot rose to global visibility through guerrilla interventions in public spaces, like the Punk Prayer performance that landed three members in prison. Today, they continue to challenge Russian politics on the international stage, while also endeavoring to bring transparency to the prison system within Russia.

Masha Alyokhina, one of the formerly-imprisoned members, and Ksenia Zhivago, head of the nonprofit prison-mapping project Zona Prava, join moderator Coya Paz in a provocative conversation about Pussy Riot’s current work taking on the Russian prison system and advocating for prisoner rights.

Pussy Riot is a Russian feminist punk rock protest group based in Moscow. Founded in August 2011, it has a variable membership of approximately 11 women ranging in age from about 20 to 33. They stage unauthorized provocative guerrilla performances in unusual public locations, which are edited into music videos and posted on the Internet, as well as reported widely by international media. Their lyrical themes include feminism, LGBT rights, opposition to the policies of Russian President Vladimir Putin, whom they regard as a dictator, and links between Putin and the leadership of the Russian Orthodox Church.

Coya Paz is the Artistic Director of Free Street Theatre, and the Lead Artist for the Poetry Performance Incubator at the Guild Complex. She is also a founding member of Proyecto Latina, and the co-founder of Teatro Luna, where she served as co-Artistic Director from 2000-2009. Coya is an Assistant Professor in The Theatre School at DePaul University, and holds a PhD in Performance Studies at Northwestern University. She is a regular commentator on race, media and pop culture for Vocalo.org (89.5). Above all, she believes in the power of performance and poetry to build community towards social change.

If you require accommodations to fully participate in this event, please email events@ilhumanities.org at least 72 hours prior to the event.