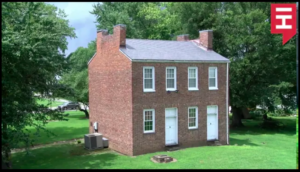 Illinois Humanities will open its 2020 season of Country and City: Common Ground in the Prairie State? with “People, Places and Power: Gallatin County Edition on Thursday, August 20 at 7pm via the Illinois Humanities YouTube channel.

Many issues confronting our state and our nation involve the relationship between population distribution and the allocation of political power and public resources. This online program examines that complex relationship from the vantage point of Gallatin County in southeastern Illinois. Gallatin County’s evolution illustrates the dramatic changes in population distribution that have occurred over the state’s history, as well as the resulting changes in the geographic distribution of power. The program features…

Our “People, Places, and Power” programs anticipate our 2021-22 Illinois tour of “Voices and Votes: Democracy in America,” the newest Museum on Main Street exhibition from the Smithsonian Institution. For information about that tour, please visit ilhumanities.org/moms.

“Gallatin County is remarkably historic and scenic. We wish the pandemic weren’t preventing us from being there in person,” said Gabrielle Lyon, executive director of Illinois Humanities. “Gallatin is one of fifteen Illinois counties that already existed when Illinois became a state in 1818. Shawneetown and Equality were among the most important towns in Illinois during the first several decades of its statehood before they were eclipsed by cities like Springfield and Chicago. The county’s evolution illuminates the dramatic changes in population and shifts in political power that have been occurring in Illinois. Understanding our state’s history can really help us also understand our present – what divides us and what we share.” Future programs in the series will focus on Fulton County and Chicago. Each program will feature a location within Illinois where that relationship and issues arising from it seem especially significant.

More on The Participants

This program is part of the “Democracy and the Informed Citizen” initiative, administered by the Federation of State Humanities Councils. The initiative seeks to deepen the public’s knowledge and appreciation of the vital connections between democracy, the humanities, journalism, and an informed citizenry.

Illinois Humanities is presenting “People, Places, and Power: Gallatin County Edition” in cooperation with the Gallatin County Historical Society, the Ohio River Scenic Byway Visitors Center in Equality, and the Paul Simon Public Policy Institute, and with support from the National Endowment for the Humanities, the Illinois Arts Council Agency, and the Grand Victoria Foundation.

Illinois Humanities thanks The Andrew W. Mellon Foundation for their generous support of this initiative and the Pulitzer Prizes for their partnership.

Learn more about the “Distributions: People, Places, and Power” series and The Country and the City: Common Ground in the Prairie State? program.