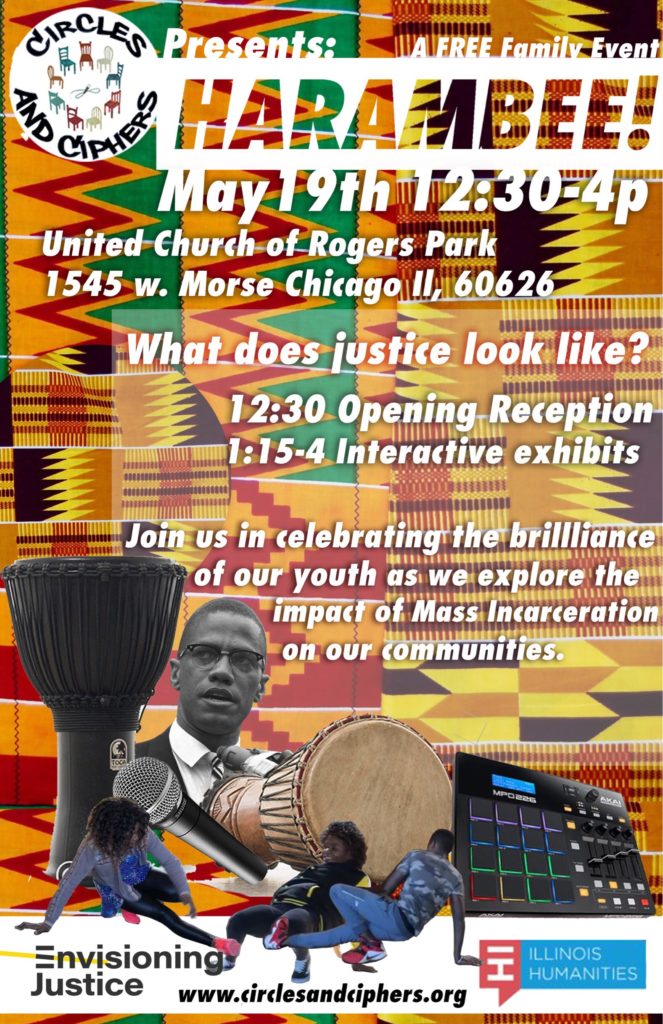 Come celebrate the culmination of the first session of Envisioning Justice in Rogers Park at Circles and Ciphers. The theme of this past session has been exploring the impact of  youth and incarceration using the five pillars of Hip Hop for discussions, performance and engagement.

Harambee is the Swahili name meaning working together, pulling together, helping each other, caring, and sharing.

During the Open House, participants will actively engage with each other while they learn about the themes presented over the last ten weeks of programming through the five pillars of Hip Hop.

MCing and DJing – A listening station of beats that were produced/ MCs will have a cipher over beats made by students from the class.

Bboying – Bboy circle will be made out of tape. Allow students and audience to bboy in the space.

Graffiti – Allow participants to be able to use stencils on boards to tag what words that correspond to what it means to have a world where we are free.

Hip Hop Peace Circle (Knowledge) — that will focus on the idea of humanity as a basic right and what that means for those that are incarcerated.

The live exhibit will allow people to be able to participate in each pillar of Hip Hop at various stations. More importantly, each pillar will also show how it has played a role in fighting against incarceration. This creates the ability to learn about hip hop and incarceration through being in it and doing rather than observing. This exhibit will also highlight the importance of healthy habits to be able to be productive in all aspects of Hip Hop.

May 19 is Malcolm X birthday and there will be a homage to Malcolm X the man and his philosophies.