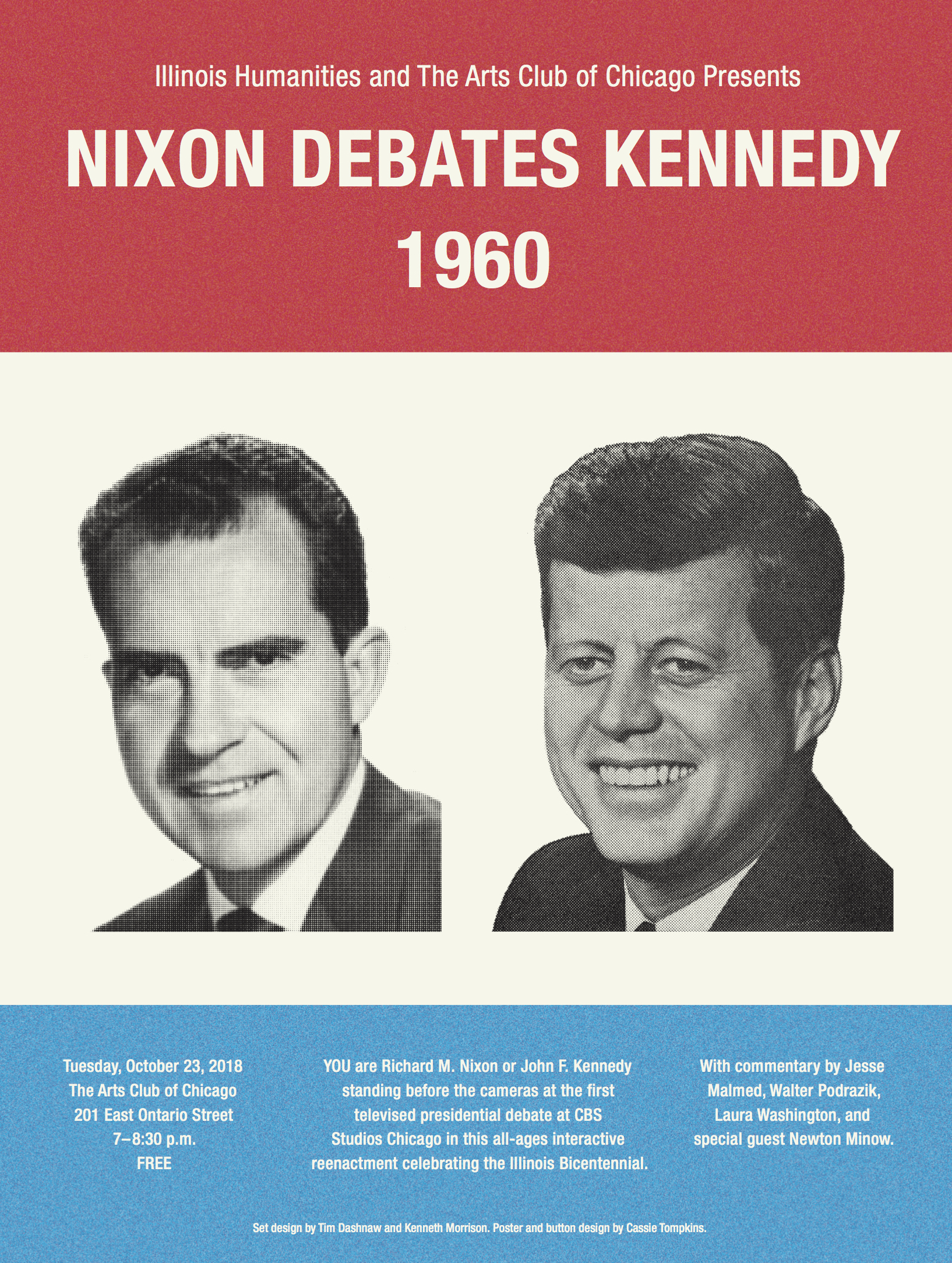 On the evening of September 26, 1960, candidates John F. Kennedy and Richard M. Nixon squared off in the first televised debate at CBS Studios in Chicago and changed the history of presidential campaigns.

Face the cameras yourself in this free all-ages reenactment of that moment: you are John F. Kennedy or Richard M. Nixon sharing your vision for the country with its voters.

Jesse Malmed is an artist and curator living and working in Chicago. His work in moving images, performance, text and occasional objects has exhibited widely in museums, cinemas, galleries, bars and barns, including recent solo presentations at the Museum of Contemporary Art Chicago, Roots and Culture, the Chicago Cultural Center, D Gallery, Syntax Season, Cinema Contra, Microlights, Echo Park Film Center, Lease Agreement and the University of Chicago Film Studies Center. His platformist and curatorial projects include the Live to Tape Artists Television Festival, programming at the Nightingale Cinema, instigating Western Pole, the mobile exhibition space and artist bumper sticker project Trunk Show (with Raven Falquez Munsell), programming through ACRE TV, and organizing exhibitions, screenings and performance events both independently and institutionally. His writing has appeared on and in Bad at Sports, Cine-File, Incite Journal of Experimental Media, The Official Catalog of the Library of Potential Literature, Temporary Art Review, Big Big Wednesday and YA5. A native of Santa Fe, he earned his BA from Bard College and his MFA from the University of Illinois at Chicago. He was named a “2014 Breakout Artist” by Newcity and has attended residencies at ACRE, Ox-Bow, Summer Forum, the Chicago Cultural Center and Links Hall. He is an Associate Adjunct Professor at the University of Illinois at Chicago and teaches in the Chicago Public Schools through CAPE.

Newton N. Minow was Born in Milwaukee, WI, the son of immigrant parents, and graduated from Northwestern University School of Law in 1950 after serving in the U.S. Army during World War II. He went on to become a law clerk for the Chief Justice of the U.S. Supreme Court, Fred Vinson. Soon after, Newt was named assistant counsel to Illinois Gov. Adlai Stevenson and worked for Stevenson during his two failed presidential campaigns in 1952 and 1956. It was on the campaign trail where Newt befriended another young Stevenson supporter, Robert F. Kennedy. Newt and Robert would often talk at length about the role the emerging technology of television was playing in American life. After Robert’s brother John won the White House in 1960, Newt was asked to become Chairman of the Federal Communications Committee. He was 34 years old. Championing the public good would become the hallmark of Newt’s career, as he played an active role in enforcing equal rights protection during the civil unrest of the 1960s, expanding the diversity of television programming, paving the way for the Public Broadcasting Service and, during the height of the Cold War, putting the world’s first communications satellite into space. The last surviving member of the Kennedy Administration, Newton Minow has provided wise counsel and sound decision-making at critical junctures in American history. Today, at the age of 92, he continues to offer a prophetic vision of American possibility.

Walter J. Podrazik is a respected television historian, analyst, and media planner. He provides insights online, in print, on radio and television, at conferences, and in a variety of education forums. A graduate of the School of Communication at Northwestern University, Podrazik is an adjunct lecturer at the University of Illinois at Chicago (UIC); Television Curator at the Museum of Broadcast Communications (MBC) in Chicago; and a member of the Board of Directors of the Library of American Broadcasting Foundation in the Washington area. Podrazik is co-author of ten books, including the television history Watching TV (third edition, Syracuse University Press). He traced the historical context of the Kennedy-Nixon debate for The Great Debate, a 2000 joint UIC/MBC education project. For the 2017 Great Books volume Tube Talk he wrote “Pursuit of the Public Interest in the Vast Wasteland” about the continued relevance of Newton Minow’s Vast Wasteland speech. Podrazik was among the on camera expert voices in the CNN decades miniseries The Nineties and The 2000s. For the CNN’s Sixties he shepherded the CBS studio camera from the Kennedy-Nixon display at the Museum of Broadcast Communications to a temporary CNN exhibition in New York City at Grand Central Terminal.

Laura S. Washington is a Chicago Sun-Times columnist and political analyst for ABC-7 Chicago. From 2003 to 2009 she served as the Ida B. Wells-Barnett University Professor at DePaul University. She has also served as a Visiting Fellow at the University of Chicago’s Institute of Politics. Washington also served as the longtime editor and publisher of The Chicago Reporter, a nationally recognized investigative monthly specializing in racial issues and urban affairs. Washington has also been the deputy press secretary to Mayor Harold Washington, and an investigative producer for CBS-2/Chicago, correspondent for “Chicago Tonight” on WTTW, and op-ed columnist at the Chicago Tribune. Washington earned her Bachelor’s and Master’s in journalism from the Medill School of Journalism at Northwestern University, where she has also taught and lectured. Her work has been honored with Chicago Emmys, several Peter Lisagor awards, and the Studs Terkel Award for Community Journalism, among others. Washington is a founding inductee to the Medill School of Journalism Hall of Achievement and recipient of the Chicago Community Trust Community Service Fellowship. Washington is widely quoted and featured in the national media, including Time Magazine, the Associated Press, New York Times, NBC Nightly News, MSNBC, PBS News Hour, and the BBC. Washington is a frequent lecturer and moderator before local and national audiences. Among other civic activities, she serves on the board of The Arts Club of Chicago.

The Arts Club of Chicago

The Arts Club of Chicago has been a preeminent exhibitor of international art, a forum for established and emerging artists, and a celebrated venue for performers from around the world since 1916. For over 100 years, The Arts Club has opened its membership to artists and patrons of the arts, and its exhibitions to the public. At its inaugural meeting, the mission of the Club was defined as: “to encourage higher standards of art, maintain galleries for that purpose, and to promote the mutual acquaintance of art lovers and art workers.”