Unfortunately, due to unforeseen circumstances, this event has been cancelled.

Please join us at one our upcoming events. There are a variety of ways to find out about upcoming events:
-join our email list here
-visit the calendar
-connect with us on Facebook or twitter. 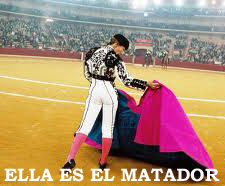 Co-sponsored by the IHC, the Chicago chapter of Women, Action & the Media (WAM!) will host “Movies & Looking at Women,” a panel discussion about the role of women as storytellers on film and in the media.

Using film clips, the group will discuss breaking down barriers, empowering women’s voices, and using film technologies to create more inclusive media. Film clips will include Xoxosms, a film following an unlikely romance between a home-schooled boy from small-town Illinois and a quirky New York City art student from South Korea, and Ella Es El Matador, a fascinating profile of two female matadors in Spain. The panel will engage in an invigorating exchange of ideas about how film and media can impact everyday lives.

This event is free and open to the public.  However, registration is required and can be made online.

About the Panel
Twanna A. Hines, M.S., is an award-winning educator, sex advisor, columnist, and TV and radio commentator focused on the sociology of sexuality and its relationship to culture and Internet technology. Founder of FUNKY BROWN CHICK®, she has contributed to CNN, NPR, Sirius, Time Out New York, Lifetime, Mashable, Nerve, New York Press, Fast Company magazine, and the Huffington Post as well Al Jazeera.

Filmmaker Nancy Schwartzman, named one of the “10 Filmmakers to Watch in 2011” by Independent Magazine, is the Founder and Executive Director of The Line Campaign (whereisyourline.org), a nonprofit using media and action to end sexual violence. Nancy’s team won the highly competitive White House Apps Against Abuse Technology Challenge with the ‘Circle of 6’ app that will help friends stay close and prevent violence before it happens.

Jessica Terlikowski has worked with AIDS United and AIDS Foundation of Chicago (aidschicago.org) to ensure that people living with and at risk of HIV/AIDS have the tools and knowledge necessary to inform and advocate for the policies that impact their lives. Director of Female Condom Advocacy and Programming, Jessica promoted the “Female Condoms Are_______ Film Contest” where filmmakers from around the globe submitted powerful and creative stories about female condoms.

This event is presented as part of The Collaborative City, a program of the Illinois Humanities Council, in partnership with the Chicago Department of Cultural Affairs and Special Events (DCASE) and co-sponsored by Women, Action, & the Media WAM! Chicago Chapter.