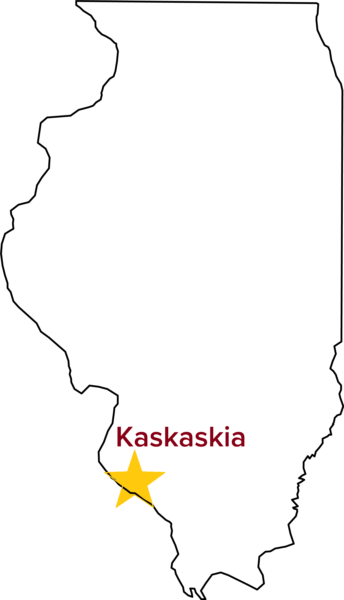 A wide variety of people have called Kaskaskia, IL home, and many different social and political configurations have characterized the community over its three-century history. Join us for the online premiere of “Kaskaskia and the Pursuit of a More Perfect Union, Part 2” as we continue to explore the legacy of one of Illinois’s smallest, yet most historic, municipalities.

The documentary premiere will expand upon themes introduced in Part 1 and discuss African American residents of Kaskaskia whose achievements made a national impact. These noted figures include Nance Legins-Costley, who, after multiple attempts, obtained freedom through a precedent-setting Illinois Supreme Court decision, and John Willis Menard, who became the first African American elected to Congress but was prohibited from serving.

A sign welcomes visitors to present-day Kaskaskia on Kaskaskia Island. The truck at right was involved in the corn harvest, which was in progress when this photograph was taken in September 2021. -Photo by Matt Meacham