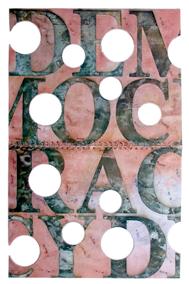 Gordon Quinn, award-winning filmmaker and co-founder of Kartemquin Films, will explore the meaning of hope in America and the value of alternative media this election season. After the films are screened, there will be a facilitated conversation with the winning filmmakers about the art of filmmaking and social change. Winning filmmakers will be awarded prizes to celebrate their commitment to creating media that encourages political dialogue, and a reception will close out the evening.

This program is free and open to the public. Reservations are recommended and can be made online, by email at events@prairie.org, or at 312.422.5580.

MORE ABOUT THE FILMS AND FILMMAKERS

Hope in America: Brandon Hummons and Chris Frills are ranked 1st and 2nd in their class going into their senior year at North Lawndale College Prep Charter High School.  These impressive African-American males from Chicago’s West Side traveled to the Democratic National Convention to ask the question, "What are the grounds for hope in America?" Both young men study film production with Free Spirit Media, a non profit committed to providing access and opportunity in media production education. Accompanying Brandon and Chris was Joseph Berry, an NLCP alumni and graduate of Southern Illinois University, who now works as an instructor and tech coordinator with Free Spirit Media. Brandon and Chris are preparing to cast their first vote in a presidential election.  Both are inquisitive, insightful, and outgoing. With their film they capture the emotion and inspiration that surrounded the DNC.  Through interviews and footage of protesters, politicians, and everyday people, they attempt to interpret this important moment in history from their valuable perspective.

Group:  "group" is a short documentary contrasting four group decision making circles at work in the Children’s School in Berwyn, Illinois. The Children’s School is a private elementary school that uses project-based learning to teach core curriculum. Group, as is it called, is a process used to address individual students’ concerns, as well as larger challenges involved in class projects or social-emotional interactions. Democracy requires the involvement of citizens.  The creation of citizens is probably the largest challenge to its very survival. Group, as practiced at the Children’s School, is one small effective tool in creating democracy now, and democracy tomorrow. The decision to tape a democratic forum created as an educational tool for personal empowerment in an elementary school on September 11 is easy enough to read in our larger political landscape. Dan Andries is a full-time producer with WTTW Channel 11. He was the Series Producer of Artbeat Chicago from 2000 to 2005, and since 2005 has produced long-form documentaries for the station, including "Chicago by Boat: The New River Tour,"  "Beauty Rises: Four Lives in the Arts" and "Out & Proud in Chicago."

Twenty Reasons: Originally a power-point performance, this video slide show with voice-over uses the genre of the list to address the contemporary phenomenon of political depression. The collaboratively-authored text, the result of a typical Feel Tank brainstorm, mixes humor and serious inquiry to delve into the troubled psyche of the body politic. Imagery combines original photos, documentation of Feel Tank projects and actions, and screen-shots from that immense sprawling data bank known as the internet. Feel Tank Chicago explores intensities of political feeling. In performance, criticism, art, and activism — especially in their International Parades of the Politically Depressed – they have focused on the political potential of "bad feelings" like hopelessness, apathy, anxiety, fear, numbness, despair and ambivalence. Feel Tank is also interested in hope.

Belleville Nights: Independent recording studio, Illegal Tone Studios opened in the fall of 2007.  The studio was designed to serve a developing music scene in the greater Belleville community in southern Illinois. Young musicians from the area were encouraged to perform and record at the new facility; a vacant store-front in downtown Belleville that housed previously, an antique store. While the recording studio/performance venue was designed to foster new and creative musical talent in the community, it quickly gained the interest and support of many young people within the community.  While this venue held significant appeal to a young artistic population, the concept proved to be a difficult challenge for the community leaders and elected officials of this Illinois community.  This brief film project helps to document several facets of democracy in action; open speech to the city council, peaceful demonstration, and personal interview. John Birkner is currently a student at Southwestern Illinois College.  A native of Belleville, John is a graduate of Belleville West High School and is active as a musician/bass player in the greater St. Louis area.

MORE ABOUT OUR KEYNOTE SPEAKER AND MODERATOR

Gordon Quinn, Creative Director and founding member of Kartemquin Films, has been making documentaries for over 40 years. At Kartemquin, he has created a legacy that is an inspiration for young filmmakers and a home where they can make high-quality, social-issue documentaries. Quinn has produced or executive produced such acclaimed films as Hoop Dreams, Stevie, The New Americans, Refrigerator Mothers, 5 Girls, and Vietnam Long Time Coming. He is currently directing a film on delayed posttraumatic stress syndrome in a childhood Holocaust survivor, Prisoner of Her Past and executive producing Terra Incognita: Exploring the World of Stem Cell Research, In the Family, Milking The Rhino, and At The Death House Door. Quinn has been a long-time supporter of public media, and community-based independent media groups, and served on the boards of several organizations including The National Coalition of Public Broadcast Producers, The Citizens Committee on the Media, The Chicago Public Access Corporation, The Illinois Humanities Council, The Public Square and The IL Advisory Committee to the U.S. Commission on Civil Rights.

Anton Seals is the District Programs Coordinator in the office of Congressman Bobby L. Rush (D-IL) and is a graduate of the film department at Columbia College. He was a recent candidate for State Representative of the 32nd Representative district on the city’s southside and organizes constituents to address issues impacting access to arts education, affordable housing, sustainable energy, food access, and technology. He is dedicated to service and active engagement through the use of the media arts and community development. He has been a pioneer in teaching urband media literacy to Chicago Public School students through his media/literacy/video/cinema training program Creative Young Minds.

MORE ABOUT THE JUDGES

Xan Aranda is the founder and Executive Director of the Chicago Short Film Brigade – a non-profit organization presenting diverse short film programs in cozy, non-festival environments around the Midwest. She is also the Associate Producer and Global Outreach Coordinator for the Kartemquin Films release MILKING THE RHINO, a feature-length documentary film (PBS Spring ’09) exploring the complexities of community-based conservation in Africa. Ms. Aranda has served on competition juries for the Chicago International Film Festival and Hugo Television Awards. She has lectured at both the School of the Art Institute of Chicago and Columbia College and has produced music videos, live show projections, and a live DVD for singer-songwriter Andrew Bird. A documentary about her personal connection to the Mormon film industry is currently in preproduction.

Eric Scholl is a faculty member in the Television Department at Columbia College Chicago, where he teaches documentary, producing, and post production. He is an independent documentary producer whose films and videos have won numerous awards and have been screened in festivals across the country and internationally.

Ines Sommer is a Chicago-based independent filmmaker with extensive experience working as a producer/director, cinematographer and curator. She received a MFA from the School of the Art Institute of Chicago, where she also taught film as an Adjunct Assistant Professor throughout the 1990s. Ines currently co-directs Evanston’s film and discussion series Reeltime Independent Film & Video Forum.

Naomi Walker worked as outreach director for Cinema/Chicago for seven years, expanding their education program in 2002 to include a monthly film screening series for Chicago public high schools. In her capacity as outreach director, Naomi curated the series, wrote the study guides and organized speakers, facilitators and panelists for each event. Naomi also organized the Teachers Institute for Media Studies, a series of workshops exploring ways for educators to use multimedia in the classroom, and served as director of the Future Filmmakers Festival, which showcased the work of filmmakers under 20. In addition to her work in outreach, Naomi works in the underground music community and sits on the board of directors of Coop Image Group and The Fire This Time Fund, a giving circle for young artists, activists and educators.

This event is part of The Public Square’s "Looking for Democracy in ’08 and Beyond" series, which is designed to launch a conversation about the kind of world we want to build together by creating forums for intelligent discussion of politics in America through art and dialogue. The "Looking for Democracy" series is supported in part by a grant from the Woods Fund of Chicago.