Join us for the latest installment of the Envisioning Justice Rapid Response Series, created by Illinois Humanities to share short original videos featuring perspectives and reflections from humanists, artists, and community organizers working in system-impacted communities during this complex time.

Envisioning Justice Rapid Response: RE-ENTRY will share the perspectives of formerly incarcerated individuals and advocates working to create more affirming spaces for returning citizens after incarceration in Illinois. Artists, humanists, and organizers will encourage us to reexamine perceptions of returning citizens and pose questions about existing approaches to accountability.

Here to weigh in:

You can watch past Rapid Response programming on the Illinois Humanities YouTube channel.

We encourage anyone looking for reentry resources to check out the Education Justice Project’s Mapping Your Future: A Guide to Successful Reentry in Illinois. Their Illinois reentry guide includes more than 200 pages of information on preparing for reentry while incarcerated, steps to take following release, and directories of resources across the state. You can view the full guide here.

Dominique Steward serves as the Hub Director for Envisioning Justice North Lawndale. She previously worked at BBF Family Services as the Manager of Development & Institutional Advancement. She believes that all humans deserve to be treated with dignity, worth and compassion and has spent her life pursuing social justice with community engagement. Her local connections to reentry and the justice system began as a community member listening to resident stories of hopelessness, trauma and struggle and wanting to take a human approach to systemic change. Recognizing that place and space and the people connected to them are connected to the value that humans give them, she challenges everyday people to confront their preconceived notions about those who live and have lived behind bars. 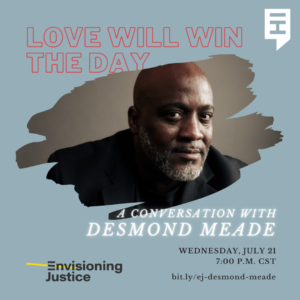 Continue the conversation about reentry on July 21 with an intimate conversation with voting rights activist and Executive Director of the Florida Rights Restoration Coalition, Desmond Meade. This program will build on the themes explored in Rapid Response: RE-ENTRY, centering the voices of formerly incarcerated artists, humanists, and community organizers in a discussion of the rights of returning citizens.