With generous support from The Joyce Foundation, and sponsorship by Letherbee Distillers, Lagunitas Brewing Co., and Perrier. 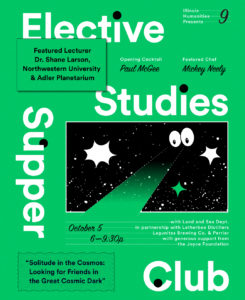 Solitude in the Cosmos: Looking for Friends in the Great Cosmic Dark
Dr. Shane Larson
of Northwestern University & Adler Planetarium

We are living in an age of profound discovery — the people alive today are the first to know, with certainty, that there are planets orbiting other stars. This realization immediately engenders another earnest question: is there life elsewhere in the Cosmos?

There are three possibilities. One is that the Earth is unique, the only shore in all the vastness of the Cosmos where life has found purchase. Another is that the Universe is teeming with life, of all sorts adapted to the conditions and peculiarities of whatever alien shoal it has grown up on. The last is that life is not unheard of, but uncommon enough that finding it could be a daunting endeavor.

In either instance — life does exist elsewhere, or Earth harbors the only life in the Cosmos — the implications are staggering and terrifying. What do we think about life elsewhere? How do you recognize life? Can you communicate with intelligences not of Earth? In this talk, we’ll explore some of the dramatic implications of the greatest question known to our species: are we alone in the Cosmos?

Shane Larson is a research Associate Professor of Physics at Northwestern University, where he is a member of CIERA (Center for Interdisciplinary Exploration and Research in Astrophysics), and an astronomer at the Adler Planetarium. He works in the field of gravitational wave astrophysics, specializing in studies of compact stars, binaries, and the galaxy. He works in gravitational wave astronomy with both the ground-based LIGO project, and future space-based detecors for NASA. Shane received a Ph.D. in theoretical physics (1999) from Montana State University. Shane is also an avid astronomer, observing with two homebuilt Dobosian telescopes, named EQUINOX and COSMOS MARINER.

Dr. Larson currently lives in the Chicago area with his wife, daughter and three cats. In addition to astronomy, he enjoys hiking, mountain biking, and geocaching. He also collects Legos, fountain pens, and telescopes. He contributes regularly to a public science blog at writescience.wordpress.com and tweets with the handle @sciencejedi.

More on the Chef

Mickey Neely is a chef based in Chicago. He has worked at a variety of restaurants for other people. He is working on opening a sandwich shop in Humboldt Park called ‘Dibs’ with a few talented partners. Expect it before the end of the year. He also operates (with his incredible roommate, Rory Toolan) a pop-up restaurant called Castle Door Supper Club. CDSC partners with Salonathon and others to bring fun dining experiences to guests with a focus on arts patronage. It’s rad.