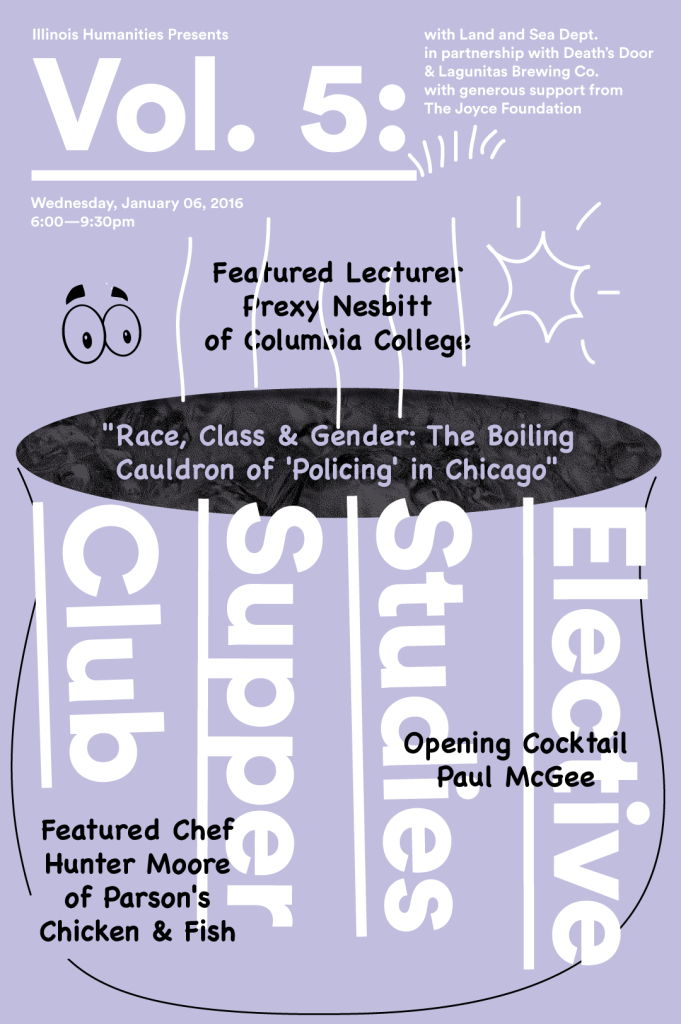 In partnership with Land and Sea Dept., the next installation of Elective Studies Supper Club continues with a lecture by activist and educator Prexy Nesbitt, who will speak about the effect that race, class and gender have on the current state of policing in Chicago. Chef Hunter Moore of Parson’s Chicken & Fish will prepare a sumptuous meal for attending artists, and Land and Sea Dept. Beverage Director Paul McGee will devise a welcome cocktail.

More on the lecture:

Born on Chicago’s West Side, “Prexy”(Rozell W.) Nesbitt has spent more than five decades as an educator, activist, and speaker on Africa, foreign policy, and racism. Prexy‘s career has also included extensive consulting and training on class, race, multiculturalism and diversity. A teacher and lecturer for many years all over the USA, he additionally has worked as a “red cap,” social worker, union organizer, special assistant to Chicago’s Mayor, the late Harold Washington, and a senior program officer with the MacArthur Foundation in Chicago.

Over the course of his career, Prexy has made more than one hundred trips to Africa, including trips taken in secret to apartheid-torn South Africa. A product of the University College of Dar Es Salaam and Antioch College, he was active in the USA, Canada and Europe in the struggle to end apartheid and worked to end colonialism in Angola, Mozambique, Zimbabwe (former Rhodesia) and Namibia (former Southwest Africa). He visited Cuba in 1975 hosted by the Cuban government to meet with leaders of the MPLA of Angola. In 1976 he co-chaired the US Out of Angola Committee, a national body opposing US military assistance to UNITA and the FNLA. From 1979-1983, he worked worldwide as the Program Director of the World Council of Churches Program to Combat Racism based out of Geneva, Switzerland. In the late 80’s he worked as a senior program officer at Chicago’s MacArthur Foundation and earlier served as senior consultant to the Mozambique Government organizing in North America to prevent the apartheid-backed rebel movement, RENAMO, from gaining official support from the Reagan administration and its allies.

Prexy has lectured and written extensively, both in the United States and abroad, publishing one book and articles in some twenty-five international journals. He was interviewed in the 1993 documentary about police brutality in Chicago, “The End of the Nightstick” and also served as a co-writer on the 1999 BBC/PBS production of The People’s Century film series segment, “Skin Deep,” a documentary about racism in the United States and South Africa. Today, he teaches African history courses at Chicago’s Columbia College and takes people on educational, cultural and political tours to various ‘Third World’ countries, regions and situations, both abroad and in the United States.

More on the chef:

Hunter Moore is the executive chef at Parson’s Chicken & Fish. Moore got his first professional job at a cheeseburger joint in Florida at sixteen. He moved to Champaign-Urbana after high school, where – while working at mediocre Italian and Vegan spots – he began to think creatively about food. From there, he moved to Chicago to attend culinary school, and once out of school, Moore worked his way through some of the city’s best kitchens, deepening both his knowledge of and passion for the craft of food, as well as cooking and hospitality in general. For Moore, food isn’t just about nourishment but about bringing us all together.