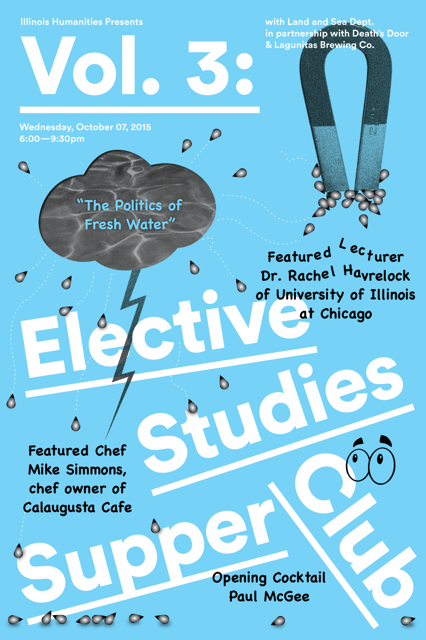 In partnership with Land & Sea Dept., Illinois Humanities presents the third volume of Elective Studies Supper Club for Illinois artists, featuring a lecture by Dr. Rachel Havrelock of the University of Illinois at Chicago, a meal by chef Mike Simmons of the forthcoming Calaugusta Cafe, and an opening drink by Land & Sea Dept. Beverage Director Paul McGee.

The Great Lakes contain one of the world’s most significant shares of fresh water, a resource necessary to almost every human endeavor and one that is fast disappearing. Is the water in the Great Lakes a global resource? Should its use be restricted to the populations on its shores and connected watersheds? What limits should be placed on the extraction rates of private companies? What role should private companies take in updating antiquated water infrastructure? How can local governments and citizen groups balance investment needs and resource protection? Are new local systems of management necessary to safeguard a water system that, however abundant, is shrinking?

The way in which one approaches these questions has obvious implications for those whose lives and livelihoods depend on the Great Lakes, but it also matters a great deal on the global scale where eyes are focused on the interstate and international frameworks that govern extraction and management of the Great Lakes. What happens with the fresh water of the Midwest matters not only to those in the region, but also to other parties desirous of access to its waters or looking to this still vital water system as a model.

Rachel Havrelock is Associate Professor at the University of Illinois at Chicago and author of River Jordan: The Mythology of a Dividing Line (University of Chicago Press, 2011). After writing about how the conflicted borders of the Israeli-Palestinian conflict formed and congealed in Palestinian and Israeli cultures around the River Jordan, Rachel became invested in water sharing as an approach to Middle East peacemaking.

Her current book project, Pipeline: How Oil Created the Modern Middle East and How Water Can Transform It, chronicles the role of oil extraction and infrastructure in the militarization of the Middle East and suggests how regional water management could transform the landscape. She conducted research in the UK supported by a fellowship at the University of Cambridge and in the Middle East on the College of Liberal Arts and Sciences Dean’s Research award. During the 2014-15 academic year, Rachel was a fellow at the University of Illinois at Chicago Institute for the Humanities. She received an alumni impact award from the U.S. Department of State Global Fellows Program in June 2014.

Rachel serves on the International Advisory Committee and works with the trilateral (Israeli, Palestinian, and Jordanian) NGO Ecopeace to link communities supported by the same watershed in order to promote regional culture premised on equitable water distribution and shared resource planning. In Fall 2013, Rachel helped Ecopeace launch the international Save the Jordan campaign on the Jordanian side of the Dead Sea. In addition to the Middle East, Rachel’s work addresses the Great Lakes as a transborder water system both abundant and imperiled. With a Global Midwest grant from the Mellon Foundation, Rachel held the April 2015 summit Water after Borders where leaders of the Great Lakes region met their Middle Eastern counterparts. She has launched the UIC Freshwater Lab in order to bring creative thinkers, humanists, scientists, engineers, policy experts, activists, artists, and residents together to face collective water challenges and envision the Great Lakes region as a leading site of a water economy and culture.

Mike Simmons is a Texan, bon vivant, food lover and chef. He has been cooking in professional kitchens for over 20 years. His career in Chicago began at an artisan bakery in 1997 and his love for high quality, hand made foods has developed into a passionate career of cooking, eating and drinking all over the US, Europe and Mexico. Mentored through his career by the likes of Jason Hammel, Shawn McClain, Marcus Samuelsson, Paul Ferzacca and Nicole Pederson, Simmons has developed a deep respect for classic and modern cooking techniques and a love for all things edible and delicious. Mike has partnered with his wife, Valerie Szafranski, and Rootstock beverage director Jamie McClennan to open a cafe in Humboldt Park in fall of 2015

If you require a sign interpreter or any other arrangements to fully participate in this program, please contact Jane Beachy at jane.beachy@ilhumanities.org at least 72 hours in advance of the event.

The exhibitions will highlight opportunities for civic action and results of that action, and the…