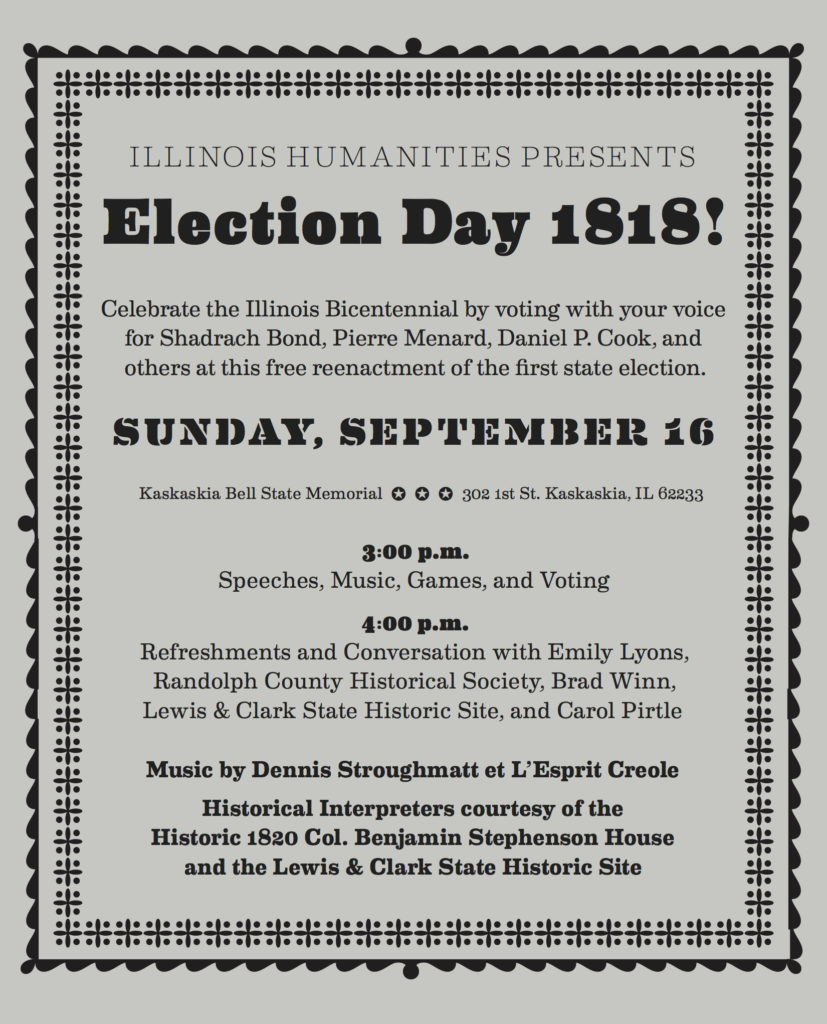 Costumed historical interpreters from the Historic 1820 Colonel Benjamin Stephenson House and the Lewis and Clark State Historic Site create the atmosphere of life during early statehood. After hearing from the candidates, members of the public are invited to vote as they did in 1818—with their voice and surrounded by their peers.

A conversation in Immaculate Conception Church with local historians Emily Lyons, Carol Pirtle, and Brad Winn about Illinois in 1818, the first election, and changes in political participation over the last two hundred years follows the vote.

Period-appropriate refreshments are being provided courtesy of Immaculate Conception Church, and the public is also going to receive a campaign button and a reproduction of the September 16, 1818 Illinois Intelligencer printed by the County-Journal.

Emily Lyons
Emily Lyons, a native of Kaskaskia, IL, taught elementary school for 35 years before retiring and taking on the role of Curator for the Randolph County Archives and Museum in 1995. She has also served on many committees over the years, including the Immaculate Conception Church Restoration and Preservation Committee and the Liberty Bell of the West Committee, which reflect her deep and abiding interest in Kaskaskia and Randolph County history and its preservation.

Carol Pirtle
Carol Pirtle, who lives in Sparta, IL, is a writer who has been published in many newspapers and national magazines including the Illinois Historic Journal. She is also the author of several plays and skits that have been published by Christian magazines and publishing houses. She is the author of three books: Shining Moments, a history of Sparta; Where Illinois Began: A Pictorial History of Randolph County; and Escape Betwixt Two Suns: A True Tale of the Underground Railroad in Illinois, published by Southern Illinois University Press. She has been awarded five Certificate of Achievement awards from Writers’ Digest in their annual article writing contest, a first place award in a state-wide article writing contest sponsored by the National Association of American Pen Women, two Certificates of Excellence from the Illinois Historical Society, and a Superior Achievement Award from the Illinois Historical Society for her book Escape Betwixt Two Suns. Carol has been married to Konnie Pirtle of Sparta for 57 years. They have three children and five grandchildren.

Brad Winn
Brad Winn has an MA in History from Georgia Southern University and regularly teaches classes on Illinois history and culture at Lewis and Clark Community College. He is the supervisor of the Lewis and Clark State Historic Site in Hartford, IL.

Dennis Stroughmatt et L’Esprit Creole
Fingers and bow flying, Dennis Stroughmatt et L’Esprit Creole takes listeners on a musical odyssey not so different from Dennis’s own musical journeys into Upper Louisianan Creole Culture. Taught to play fiddle by local Creole fiddlers in the tradition of their fathers, Dennis gradually became an adopted son of the French Midwest Creoles living along the Mississippi River near St. Louis. A vibrant blend of Celtic, Canadian, and Old Time sounds, this music bridges the gap between contemporary Canadian and Louisiana Cajun styles. A medley of music, language, stories, and culture secreted away in southern Illinois and southeast Missouri now has a voice through Dennis Stroughmatt et L’Esprit Creole, a voice that makes your soul jump, your head spin, and your heart glad to know that, as they say in the hills, On est tojours icitte! We are still here.

Kaskaskia Church Foundation Committee
The Kaskaskia Church Foundation Committee was formed after the 1993 flooding of the Mississippi River severely damaged many structures at Kaskaskia. The Immaculate Conception Church and Rectory, the original Randolph County Courthouse, and the Kaskaskia Liberty Bell of the West Shrine all survived the flooding and continued to represent the history of the Village of Kaskaskia, which had been a beacon of hope since 1703. When the Diocese of Belleville decreed that the church community would no longer be classified as a parish as it had been since 1718, it allowed for the the Church to become a chapel if the Committee could maintain it. The Kaskaskia Church Foundation Committee organized with the intention of preserving many precious artifacts, including the Liberty Bell of the West, the first bell west of the Alleghenies to ring for liberty in the American Revolution; maintaining church services at Immaculate Conception; and helping however needed with patriotic and community events and ceremonies.