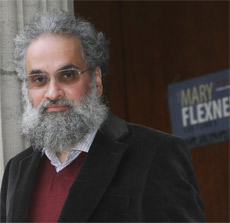 French political and commercial interests awoke in the seventeenth century to the importance of Mughal India. However the networks of circulation and the interests themselves were so complex and diverse that they failed to cohere in a single project. On the other hand, the Mughals managed deftly to work the French into the palette of ‘Franks’ (or firangis) whom they already knew. This lecture will address these issues using a variety of archival materials and printed texts. Sanjay Subrahmanyam, Professor and Doshi Chair of Indian History, joined UCLA in 2004. Educated at the University of Delhi and the Delhi School of Economics, the first decade of his career was spent (with brief interruptions) teaching economic history and comparative economic development at the Delhi School of Economics, where he was named Professor of Economic History (1993-95). Thereafter, Subrahmanyam taught at Paris as Directeur d’études in the Ecole des Hautes Etudes en Sciences Sociales, where he was from 1995 to 2002 holding a position on the economic and social history of early modern India and the Indian Ocean world. In 2002, Subrahmanyam was appointed as the first holder of the newly created Chair in Indian History and Culture at the University of Oxford, a position he held for two years before moving to his present chair. From July 2005 to June 2011, he served as founding Director of UCLA’s Center for India and South Asia. At UCLA, Sanjay Subrahmanyam teaches courses on medieval and early modern South Asian and Indian Ocean history; the history of European expansion; the comparative history of early modern empires; and world history. He advises graduate students on Indian history, the history of the Iberian empires, and more generally on forms of “connected histories”. He is also Joint Managing Editor of the Indian Economic and Social History Review, besides serving on the boards of a number of other journals in the US, UK, and Portugal. He is currently on the editorial board of the multi-volume Cambridge History of the World, and will jointly edit Volume VI (in 2 parts) with J.H. Bentley.