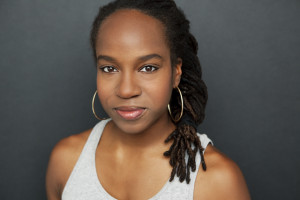 Choreographers, dancers and performance artists will have an opportunity to learn from innovative solo performer Dana Michel in this dynamic, on-your-feet workshop.

Please email to enroll.
Space in the class is limited.
We will begin a waiting list once we have reached capacity.

Dana Michel is a choreographer and performer based in Montreal, Canada.  Before entering the BFA in Contemporary Dance program atConcordia University in her late twenties, she was a marketing executive, competitive runner and football player. In 2011, She had the honour of being a danceWEB scholar, allowing her to deepen her research process at ImPulsTanz in Vienna, Austria.

Her practice is rooted in exploring the multiplicity of identity using intuitive improvisation.  She works with notions of performative alchemy and post-cultural bricolage – using live moments, object appropriation, personal history, future desires and current preoccupations to create an empathetic centrifuge of experience between herself and witnesses.  Today, her work can perhaps best be described by its influences: lucid cinematography, living sculpture, physical comedy, psychological excavation, deconstructed social commentary, the bulimic logic of Hip Hop and child-like naïveté.

Her work has been presented in North America (Montreal, Quebec, Toronto, Ottawa, Boston, Salt Lake City and New York City) and in Europe (Austria, Belgium, Serbia & Switzerland).  Inhabiting both traditional and non-traditional spaces is a key component in the creation of her work.

Over the past nine years, her work has been awarded the Montreal Fringe Festival “Best Dance Production” in 2005, the Globe and Mail’s “Best Emerging Choreographer” in 2006, and a “Top Ten Choreographers” listing by the Montreal Mirror newspaper in 2007, 2008 and 2009. The film version of her solo the greater the weight won the jury prize for the “Best Female Performance” at the 2009 InShadow International Festival of Video, Performance and Technologies in Lisbon.

Michel’s newest solo, Yellow Towel, premiered at the 2013 Festival TransAmériques(Montreal) to critical acclaim.  The work featured on the “Top Five” and the “Top Ten” 2013 dance moments in the Voir newspaper (Montreal) and Dance Current Magazine(Canada) respectively and was recently singled out as one of the most remarkable productions at the 2014 American Realness Festival (New York City) by the New York Times.