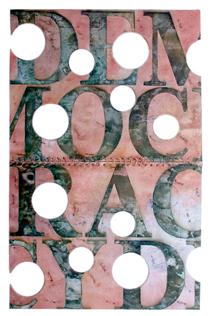 We asked you to be radically creative and show the world what democracy — making it & sustaining it– means to you and you answered! Join us as our Looking for Democracy Film Contest winners are unveiled.

The winning films are:

Join us for a special screening of our winning short films, a conversation with the filmmakers, and a panel discussion entitled “Art Hurts, Art Urges Voyages” with local artists. Panelist include Xan Aranda, filmmaker and founder of  the Short Film Brigade; Tara Malik, photographer and Program Director at Beyondmedia Education; and A. Zell Williams, playwright and recipient of a Steppenwolf Theatre Company fellowship. This celebration will be emceed by touring poet Robbie Q. Telfer, and feature youth poetry performances.

This event is free and open to the public. Reservations are required and can be made online, at events@prairie.org, or at 312.422.5580. Teachers are especially encouraged to bring students to this intergenerational event. Email cak@prairie.org with your phone, email, school name, and number of students that will be attending.

About our winning filmmakers and their films

American Flag by Theophilus Jamal
American Flag examines issues of free speech during a spontaneous heated debate over an art exhibition portraying a desecrated flag hung upside down in a highly visible Waukegan storefront in 2002. The store owner/ artist faces off against a group of disgruntled veterans over the meaning of the display. Ultimately, there is no resolution over this age old debate. As a bystander burns a flag, all we can do is watch and contemplate what has transpired.

Theophilus Jamal is from Waukegan, Illinois. Jamal’s baptism of film occurred in 1977 when he shot his first Super-8 film with friends from rival gangs in North Chicago, IL. The assembly quickly turned into a riot dispersed by police. Jamal has cine worked professionally  both behind and in-front of the camera, most notably appearing in Conspiracy: The Oklahoma City Bombing, as an undercover operative turned terrorist Edwin Angels and as a character in the John Woo directed video game “Stranglehold”. He has also worked for several prestigious film festivals (Sundance, SXSW, Chicago Intl’ Film Festival) and ardently support local non-profit organizations by conducting media workshops for urban youth. He is currently an MS in Digital Cinema Masters Degree Candidate in DePaul University’s College of Computing and Digital Media (CDM).

Hungry for Change by Free Spirit Media
How does an inner-city Chicago neighborhood cope with having one grocery store to feed underserved families? A group of ambitious filmmakers from that very North Lawndale neighborhood answer this question as they tackle the issue of living in a food desert. Partnering with Free Spirit Media, the group of students find out what’s happening, who is responsible, and most importantly, what’s next?

Free Spirit Media partners with schools and organizations to provide education, access, and opportunity in media production to underserved urban youth. Through hands-on production of their own media content, participants build life skills in communication, critical and independent thinking, teamwork, and the use of technology. Believing that youth perspectives are a critical element of American culture, Free Spirit Media actively distributes student work to a range of audiences. During the summer, Free Spirit Media works in partnership with Umoja Student Development Corporation to engage students in a six week internship in which students learn about, make change, and produce a film on relevant community issues.

Democracy 2 by The Theatre of Social Justice Project, a collaboration between students from Francis W. Parker High School and Rudy Lozano Leadership Academy.
This public service announcement makes a statement in 38 seconds about the importance of shared experiences and shared commitment across cultural, class, and racial lines; for democratic life in America. It questions the difficulty of realizing this kind of shared space in the segregated context of Chicago.

The Theatre of Social Justice Project is collaboration between Rudy Lozano Leadership Academy and Francis W. Parker School students.  To create the film, students chose a context in which they personally experience democracy – or the lack of democracy — for example, family, community, school, friendships, political power. This filmmaking group consisted of a combination of Rudy Lozano and Francis Parker 10th grade students, who shared stories about their families, communities, or schools.  From these stories, the group generated a short film to express the challenges and opportunities for democracy they experienced.

About our Special Guests

Xan Aranda is an independent filmmaker affiliated with acclaimed documentary company Kartemquin Films since 2007. She is a Producer of their multi-award winning 2008 release Milking the Rhino, which aired on PBS and continues to screen worldwide. Xan is directing her first feature documentary film, Mormons Make Movies, now in development with Kartemquin. She also recently produced and directed Andrew Bird: Fever Year, a feature-length concert film. As Founder of the Chicago Short Film Brigade, Xan has been curating and hosting screenings of local and international short films since 2003. She has served on competition juries for the Chicago International Film Festival, Hugo Television Awards, and Illinois Humanities Council, and is a frequently featured guest lecturer at Columbia College, among others.

Tara Malik received her BFA in Photography from Rochester Institute of Technology and has used photography as a tool for expression, education, and activism for the past fifteen years. An educator and organizer of urban youth photography programs, she helped form The New Orleans Kid Camera Project, a community based arts program created to address the impacts of Hurricane Katrina on children returning home to New Orleans. Tara is co-founder of One Bird and received her Masters degree at Columbia College Chicago in Arts, Entertainment and Media Management specializing in Arts in Youth and Community Development.

A. Zell Williams was born and raised in the San Joaquin Valley of California and started his career as an actor in the San Francisco Bay Area. His writing examines the changing landscape of race, class, and privilege in contemporary America and how movements of the past have shaped the present.  He was one of two inaugural African-American Fellows with Steppenwolf Theatre Company. Zell has received the David Calicchio/Marin Theatre Company Emerging American Playwright Prize, was a finalist for the Yale Drama Series for Emerging Playwrights, and a semifinalist for the Princess Grace Award, the Ashland New Play Festival, and the Reverie Production’s next Generation Playwright’s Contest. He holds a BA in Theatre Arts from Santa Clara University and is a member of The Dramatists Guild of America, Inc.

Robbie Q. Telfer is a touring performance poet, having been a featured performer/reader in hundreds of venues across North America and Germany – most recently with the spoken word experience The Junkyard Ghost Revival. Previous work appears in the American Book Review, Octopus Magazine, cream city review, and decomP magazinE, as well as several spoken word anthologies and DVDs. He was an individual finalist at the National Poetry Slam in 2007 and he co-wrote the video game Ninjatown DS. He lives in Chicago where he curates the Encyclopedia Show and is the Director of Performing Arts for Young Chicago Authors, a not-for-profit that gives creative writing opportunities and mentorship to Chicago teens. His first published collection of poetry, Spiking the Sucker Punch, is out from Write Bloody.

If you need a sign interpreter or require other arrangements to fully participate, please call 312.422.5580. For parking locations near the facility, please visit ChicagoParkingMap.com.