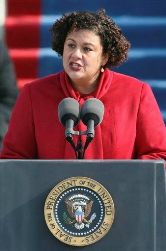 "Words matter. Language matters. We live in and express ourselves with language, and that is how we communicate and move through the world in community. This is only the fourth time in our history that a President has featured a poet at his inaugural. I hope that this portends well for the future of the arts in our everyday and civic life."
-Elizabeth Alexander, December 2008

Join us for a lecture by Elizabeth Alexander, who was selected to compose and deliver a poem at the inauguration of President Barack Obama at the United States Capitol on January 20, 2009. Alexander , one of the most vital poets of her generation, is currently a professor of African-American Studies at Yale University as well as incoming chair of that department.

This event is free and open to the public. Space is limited, please RSVP to gwsinfo@uic.edu. For more information, call 312.413.7629.

Elizabeth Alexander is one of the most vital poets of her generation. She has published five books of poems: The Venus Hottentot (1990), Body of Life (1996), Antebellum Dream Book (2001), American Sublime (2005), which was one of three finalists for the Pulitzer Prize and was one of the American Library Association’s "Notable Books of the Year," and most recently, her first young adult collection (co-authored with Marilyn Nelson), Miss Crandall’s School for Young Ladies and Little Misses of Color (2008 Connecticut Book Award). Her two collections of essays are The Black Yale Interior (2004) and Power and Possibility (2007). Her play, Diva Studies, was produced at the Yale School of Drama. She is the 2007 winner of the first Jackson Prize for Poetry, awarded by Poets and Writers. Other awards include a National Endowment for the Arts Fellowship, two Pushcart Prizes, the George Kent Award, given by Gwendolyn Brooks, and a Guggenheim fellowship. She is a professor of African-American Studies at Yale University as well as incoming chair of that department.

This event is co-sponsored by Gender and Women’s Studies Program at University of Illinois At Chicago and The Public Square.