Educator Caroline Kisiel considers it an honor to help illuminate the forgotten yet important history about slavery, indentured servitude, and race-based legislation in our state, as well as the important period when Illinois was on the brink of becoming a slave state – supporting communities across Illinois in their greater individual and collective understanding, and their efforts for civic engagement today. As a Road Scholar, she has been able to take the scholarly research she conducts beyond the halls of academia and into Illinois communities who may not otherwise have learned about this subject matter.

Did Black Lives Matter in Early Illinois? Voices from the Brink of Slavery and Freedom

Lives in Code: Stories of African American Resilience Under the Illinois Black Codes, 1819-1865

Caroline briefly describes herself and her programs…

Did Black Lives Matter in Early Illinois? Voices from the Brink of Slavery and Freedom

In 1818, Illinois entered the United States with a Constitution declaring itself a free state, following the guidance of the 1787 Northwest Ordinance, which outlawed slavery north of the Ohio River. But slavery’s roots went back centuries in the region, and its hold on the young state was strong. In the first years of statehood, the Illinois legislature included a number of proslavery advocates who made a bold attempt to change the Constitution to allow slavery. They had already succeeded in building in limited slavery clauses into the 1818 Constitution which were to sunset in 1825, and they now wished to expand this foothold. Others vehemently fought against them, ultimately prevailing to preserve the free state.

Who were these voices advocating for a permanent constitutional change to allow slavery? And who stood up against them, preserving the free state of Illinois we know? And ultimately, in what ways did these opposing voices support Black lives, or not? This performance-presentation offers a dramatic reading/adaptation of the voices of three key proslavery figures (Ninian Edwards, Territorial Governor; Joseph B. Phillips, secretary of the Illinois Territory; and Adolphus Frederick Hubbard, proslavery delegate) and three antislavery figures (Edward Coles, second governor of Illinois; Nicholas Hansen, anti-convention legislator; and Morris Birkbeck, English emigrant and Illinois Secretary of State) from this period.

While stories of prominent antislavery figures from later years are more widely recognized (Elijah Lovejoy, Abraham Lincoln), the very early years of statehood were marked by a significant struggle for and against slavery that illuminates the inheritance of what some called “old slavery” in the region, and what was often benignly masked as “servitude.” Historical records offer these six figures’ words, which will be given a voice today through this performance-presentation.

But their voices are only part of the story, as their rationales for or against slavery were not simply black and white, so to speak. Alongside selections from these voices of the past, a presentation with visuals will illuminate the complexities of their rationales, their backgrounds and views, and the forces that shaped them.

This performance-presentation draws on academic research for presentations that Caroline has delivered at numerous historical conferences, research she is conducting for a book, and material she engages in with university students. The structure of this performance-presentation includes: (a) dramatic readings of the words of these key figures in the slavery and abolition struggle in Illinois and/or voices from the period, (b) a presentational overview of key historical information, followed by (c) a question-and-answer period, which can include facilitated audience engagement activities around questions raised by the historical figures and the value of their activism for today.

The presentation takes approximately 45-50 minutes. Projector and screen are necessary. This presentation is available in-person and virtually via Zoom, using the technology in creative ways.

Lives in Code: Stories of African American Resilience Under the Illinois Black Codes, 1819-1865

As the home of celebrated champions of freedom such as Abraham Lincoln and Barack Obama, it is often surprising for Illinoisans to learn about the long history of slavery, racial segregation and exclusion in Illinois’s past.

Federally obligated by the Northwest Ordinance of 1787 to pass its constitution as a free state in 1818, residents in the region prior to Illinois statehood had practiced slavery and indentured servitude since the 1700s. This laid the groundwork for a series of harsh laws passed post-statehood called the Illinois Black Codes, which regulated the lives of enslaved people, indentured servants and free Blacks in Illinois from 1819-1865 – a period of 46 years.

Among the restrictions under these Codes, free Blacks residing in the state were required to possess certificates of freedom and register themselves and family members with the court; hiring of free Blacks who did not possess certificates of freedom was considered a crime; bringing slaves into the state for the purpose of freeing them was deemed a crime, and if discovered, a fine of $1,000 was to be imposed; and enslaved people or servants were barred from selling goods, gathering in groups of three or more, or traveling more than ten miles from their master’s home.

Despite these restrictions, African Americans in nineteenth-century Illinois persevered. They forged livelihoods and established communities; they purchased land; they abided by the draconian laws, registering themselves and family members; and they sheltered, protected and defended runaways, or “freedom seekers.” This presentation will highlight stories of African American resilience under the Illinois Black Codes.

Audiences will learn about Gilbert Burres, a free Black resident of Albion in Edwards County, who first registered with the county clerk as a free person of color in 1824, and returned to the county clerk seven times over the next 36 years to register himself, his wife and his children as his family grew. “Uncle Joe” Higginbotham, an ex-slave, arrived in Clay County around 1835 and reportedly acquired 800 acres of land during his time in Illinois, raising a family and attracting other free Black settlers. Free Black settlements such as Brooklyn and New Philadelphia were established and attracted settlers, and these communities were often safe harbors for northbound freedom seekers. And free Black John Jones, a conductor on the Underground Railroad in Chicago, spoke out against the cruelty of the Codes and championed the cause of repealing them through lobbying with lawmakers and publishing “The Black Laws of Illinois and a Few Reasons Why They Should be Repealed” (1864). These are just a few of the stories of African American resilience from this harsh period that will be illuminated in this presentation, which celebrates our Illinois forbears who persevered despite the Codes.

This presentation draws on academic research for presentations that Kisiel has delivered at numerous historical conferences, research she is conducting for publication, and material she engages in with university students. The structure of this presentation includes: (a) a presentational overview of key historical information, followed by (b) a question-and-answer period which can include facilitated audience engagement activities around questions raised about the lives of these courageous historical figures and the value of their resilience for today.

The presentation takes approximately 45-50 minutes. Projector and screen are necessary. This presentation is available in-person and virtually via Zoom, using the technology in creative ways. 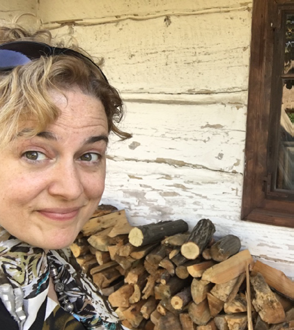 Caroline Kisiel is a public historian and educator who has been teaching for over 25 years. With a background in immigration law, literature, history, storytelling, and performance, Caroline writes and presents on early Illinois history and is currently conducting research on the role of Albion, Illinois in the struggle to keep Illinois slavery-free in the early years of statehood as well as research on stories of African American resilience under the Illinois Black Codes.

Caroline showcases researched information and historical documents, and facilitates audience engagement activities around questions of the value of history and activism through themes of early Illinois struggles to keep slavery at bay in the state, the fight for African American rights, and key early Illinois figures in this period who fought against racism and exclusion—and persevered despite the odds.

Step 1
Contact Caroline to schedule a date and time via email at ckisiel@depaul.edu.

Step 2
Once you and Caroline have agreed upon a date and time, complete the Road Scholars Host Organization application.